UPDATE: The shortlist for the Etisalat Prize was announced December 9th, culling the longlist of nine titles down to three: An Imperfect Blessing by Nadia Davids, Penumbra by Songeziwe Mahlangu, and Happiness, Like Water by Chinelo Okparanta. The winner will be revealed February 22, 2015.

This week, the prize administrators shared the 2014 longlist contending for the £15,000 cash prize and a fellowship at University of East Anglia under the mentorship of Professor Giles Foden, author of the Last King of Scotland. Judges Sarah Ladipo Manyika (Chair), Alain Mabanckou, Jamal Mahjoub, and Tsitsi Dangarembga will agree on a whittled list by December 8, 2014, and, ultimately, the winner, who will be announced on February 22, 2015.

An Imperfect Blessing by Nadia Davids
Whoever Fears the Sea by Justin Fox
The Thunder that Roars by Imran Garda
Penumbra by Songeziwe Mahlangu
Kintu by Jennifer Nansubuga Makumbi (the 2014 Commonwealth Prize Winner)
Fresh Air and other stories by Reward Nsirim
Happiness, Like Water by Chinelo Okparanta (this year’s Lambda Award Winner for Lesbian General Fiction)
Ghana Must Go by Taiye Selasi (longlisted for the 2014 Sunday Times EFG Short Story Award)
Shadows by Novuyo Rosa Tshuma 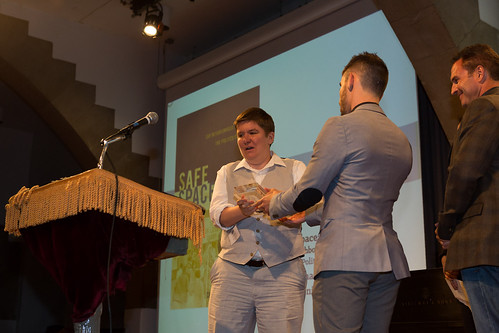 The 26th Annual Lambda Literary Awards opened Gay Pride Month with a celebration of the best in LGBTQI literature, past and present. The celebration began with a screening of the video “The LGBTQI Book That Saved My Life” in which readers shared the tomes that helped them come out, whether to their worlds or themselves. Graphic memoirist Alison Bechdel was feted with the Board of Trustees Award for Excellence in Literature for her body of work which includes comic strip Dykes to Watch Out For and graphic memoirs Fun Home and Are You My Mother?

Kate Bornstein earned a standing ovation for her acceptance speech after receiving the Pioneer Award by her life partner Barbara Carrellas. Michael Thomas Ford and Radclyffe were awarded with the Dr. James Duggins Outstanding Mid-Career Novelist Prize and Imogen Binnie and Charles Rice-Gonzalez were presented with the Dr. Betty Berzon Emerging Writer Award.

BISEXUAL NONFICTION
The B Word: Bisexuality in Contemporary Film and Television by Maria San Filippo

LESBIAN POETRY
Rise in the Fall by Ana Bozicevic

GAY MYSTERY
The Prisoner of the Riviera: A Francis Bacon Mystery by Janice Law

GAY ROMANCE
Into This River I Drown by TJ Klune

LGBT DRAMA
Tom at the Farm by Michel Marc Bouchard

LGBT STUDIES
Safe Space: Gay Neighborhood History and the Politics of Violence by Christina B. Hanhardt

For many writers, the path to publication is fraught with rejection and interminable periods waiting for a response or decision. Not so for Chinelo Okparanta who was named one of Granta Magazine’s six New Voices for 2012.

Her upcoming story collection Happiness, Like Water, which she wrote while attending the prestigious Iowa Writers’ Workshop, was sold, she says, “in a very non-dramatic, almost underwhelming sort of way.” Instead, the Amazon description of her book suggests all the excitement is reserved for the stories in her book. “In Happiness, Like Water Chinelo Okparanta offers a portrait of Nigeria that is surprising, shocking, heartrending, loving,” the abstract reads.

Coming August 13, 2013, Okparanta points to “Wahala!” and “Story, Story!” for the surprises promised in the synopsis, adding, “All the stories are quite a bit heartrending, but ‘Runs Girl’, ‘Grace’, ‘Tumors and Butterflies’ and ‘Shelter’ stick out to me as the most heartrending.”

What sparked you to write Happiness, Like Water?
I wrote many, if not all, of the stories during my second year at the Iowa Writers’ Workshop. Each story had its own separate trigger–an incident, a memory, an emotion, a problem. Whatever the trigger, I made it a point to sit down and write, and to my surprise, the stories gushed out.

What was your process for writing Happiness, Like Water?
I wrote HLW while completing my MFA at Iowa… I’ve never set for myself a strict writing schedule, but I do find that my head is much clearer in the mornings than later in the day, and so I’ve gotten into the habit of writing as soon as I wake up. Of course, it’s not every morning that one sets out to write that one succeeds in getting any writing done.

What’s the short story of how Happiness, Like Water got published?
HLW was lucky. I was lucky. Editors and agents frequently visit the Iowa Writers’ Workshop, and I was lucky to be signed by one of these visiting agents. Shortly after, I was lucky to have two stories picked up by a visiting editor. The timing was right. Eventually the book was sold–in a very non-dramatic, almost underwhelming sort of way.

Being from Nigeria, I’m sure you’ve been called an “African writer” at least once in your career. How do you feel about the term?
I’ve been called an African writer, yes. The term does not bother me insofar as I am in fact African and proud of my African-ness. But I am also aware that the term “African Writer”, like many other racial labels, can be limiting, constricting. In a sense, claustrophobic. This is the nature of categorization in general. Categories have a way of boxing us up, of creating divisions, of constructing walls that seem to say, “You belong there, but I here.” I understand that categories are also essential for acknowledging the existence of differences. They can be affirming, and so I appreciate them. In recent history, they have even been essential in the fight for equal rights of underrepresented groups. They have led to quite a bit of progress where that is concerned. However, I believe that it will be a sign of even more progress when we arrive at a point in which we no longer have to rely so heavily on them, not even as a marketing ploy.

What are you working on next?
A novel and a second collection of stories.

>Tinesha Davis is working on one thing–finishing her 2nd book